Balenciaga is yet again embroiled in controversy, but this time around it isn’t because of a controversial fashion release. Oh, how I wished it was that. But unfortunately, the reality is way more disturbing. So disturbing that the brand might never really recover from this.

In case if you somehow missed it, Balenciaga is currently facing severe backlash over the release of two separate ad campaigns. The first campaign titled “Gift Shop”, also known as Balenciaga’s 2022 Holiday Campaign, was published on November 16th and featured images of children holding teddy bears dressed in bondage, while the other campaign published five days later (this time promoting Balenciaga’s recent collaboration with Adidas, the “Garde-Robe” campaign) included a reference to a Supreme Court case on child p*. I don’t know how about you, but I’m personally feeling disgusted by even mentioning these campaigns. I mean, how could anyone at Balenciaga think these were a good idea in the first place? What were they looking to achieve? Well, if that was getting cancelled, then congratulations, the goal has been accomplished.

To be completely honest, I haven’t been a huge fan of Balenciaga ever since Demna Gvasalia became the brand’s creative director. Yes, over these years I’ve featured Balenciaga a couple of times on my blog. Specifically, their bags (actually, not all of them were even Demna’s creations). However, I haven’t really spoken about anything else from the brand. Not even their most recent controversial releases, like the trashed sneakers that Balenciaga was selling for $1,850, or the latest Demna masterpiece – a handbag that looks just like a pouch of Lay’s potato chips. Obviously, the whole point of those releases was to make people talk about Balenciaga and give the brand free publicity, which they did get every single time. Hence why they continued pushing the boundaries and we are where we are today. 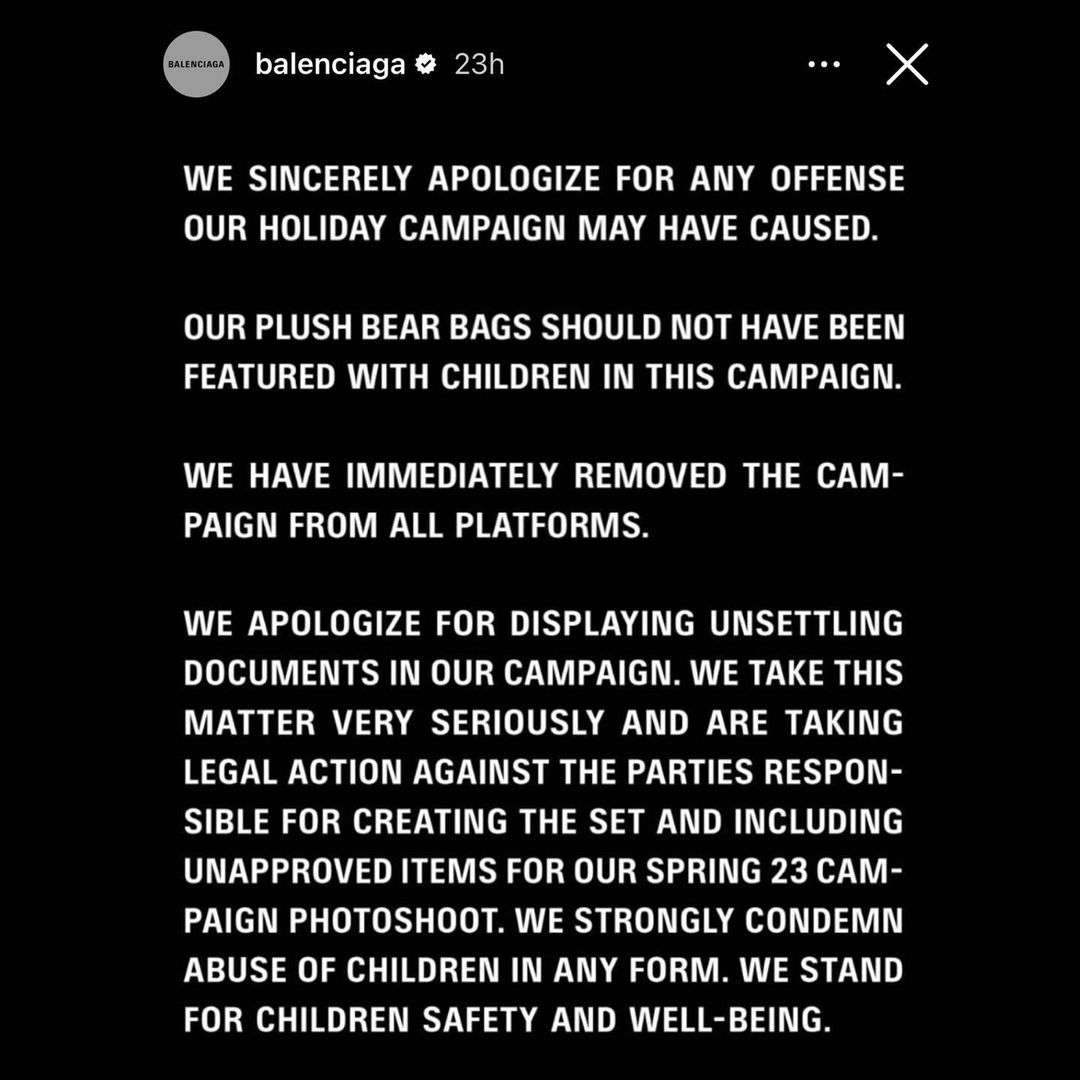 While Balenciaga has since apologized for both ad campaigns and took them down, it didn’t really help things. Perhaps if they’ve responded straight away, the situation could be different. However, they didn’t. In fact, it took them over a week to acknowledge that children shouldn’t have been featured in the first campaign. But well, at least with that they took some sort of blame, in comparison to the second campaign, where all they said was that they are taking legal actions against the parties responsible for the set. Seriously? You are going to shift the blame on the production company instead of Demna and your in-house creative team that has obviously been responsible for every single of your ad campaigns? Because that’s where the whole idea of sexualized teddy bears came from in the first place. At least, that’s what I am convinced of. Here’s why.

A little bit about Demna’s Friends and Collaborators

Demna has long been known for being friends with people that are into some really dark things. See, for example, Lotta Volkova, who has been working as a stylist for Balenciaga for years, openly posting sinister things on her Instagram, including photos of children in bondage and teddy bears, lots of teddy bears. She, however, claims that she hasn’t been working for the brand since 2017. Well, while this might be true, where there’s smoke, there’s fire, and her influence on Demna is undeniable. Just like her friendship with Gosha Rubchinskiy, a Russian designer who has previously made headlines for allegedly pressuring a young boy to send him nudes. And actually, Demna and Gosha aren’t strangers either. In 2016, the Balenciaga designer famously posted on his Instagram: “Someone wrote that Lotta (Balenciaga stylist), Gosha, and I grew up on child p* and radiation from Chernobyl, which is why we’re so f*ucked up”. I think this quote from Demna says it all.

Talking about Demna, his apology came much later than expected. To be honest, I’ve even started thinking that we aren’t going to hear from him, but no, on December 2nd, the Balenciaga designer took his Instagram to say the following: “I want to personally apologize for the wrong artistic choice of concept for the gifting campaign with the kids and I take my responsibility. It was inappropriate to have kids promote objects that had nothing to do with them”. He then added that he condemns child abuse and hopes to learn from this.

In case if you’re wondering what type of objects Demna is talking about in his apology statement, that’s the items that were featured in Balenciaga’s 2022 Holiday Campaign along with the bondage teddy bears. Those were empty glasses for alcoholic beverages, harnesses and other creepy-looking items that aren’t meant for children to begin with. Well, at least Demna and Balenciaga have now taken responsibility for this. However, notice how Demna hasn’t even mentioned the other campaign in his apology? The campaign with the creepy Supreme Court document. I guess at this point, both Demna and Balenciaga are just looking to distance themselves from the other scandal as much as possible.

Also, as someone who has worked with high-profile fashion brands before, I can’t help myself, but wonder, how could both of these campaigns get approved in the first place? The thing is that any marketing campaign, and especially, when it’s an ad campaign for such a high-profile brand like Balenciaga, usually goes through multiple approvals before it goes live. And those aren’t just approvals of the concept, but also approvals of the models and products to be featured in the campaign. Furthermore, brand’s representatives would also very likely be there on the day of the shoot, in order to make sure that what is being shot is in line with what’s been approved. You get where I’m going? The amount of people that these ad campaigns have passed through before going live is mind-blowing.

Still thinking that all of this could simply be a sloppy mistake? Then check the interview Gabriele Galimberti, the photographer behind Balenciaga’s 2022 Holiday Campaign, has recently given to the Insider. Not only did he make clear that he had no creative direction when it came to the products featured in the holiday campaign, but he also revealed that when he arrived to the shoot “everything was basically already made”, and there were 25 people from Balenciaga working on the set.

Obviously, after the campaign came out, Galimberti immediately received backlash. He even had to issue a statement on Instagram, which basically reads that he was not entitled in whatsoever manner to neither choose the products, nor the models, and that he only did what he was asked to do, which is take the shots according to his signature style. He also reiterated that he has no connection with the other photo, that on which the Supreme Court document appears.

My Stance on the Scandal

To be honest, I don’t think we should blame the photographer for this mess because he was only doing that he was asked to. The real culprits in this situation are Demna, his creative team and Balenciaga/Kering management. It’s them that should be held accountable, not the photographers. And I think they’re finally getting it at Balenciaga as they’ve just dropped the lawsuits they’ve announced earlier against the production company responsible for the set of the second campaign.

Do I think Balenciaga will be ever able to recover from this? Possibly. In my personal opinion, it all depends on whether they will be willing to part ways with Demna and everyone else involved with these campaigns. You know, I really understand that fashion is meant to provoke, but there should be some limits. Demna and his team clearly don’t care about those.

And well, I think you can already guess that I won’t be supporting Balenciaga moving forward. Just like I won’t be supporting certain celebrities that continue working with the brand despite the scandal. I am lucky not to have anything from the brand in my wardrobe. But even if I had anything, I would take those pieces to a consignment store immediately and donate all proceeds to organizations engaged in helping children that have suffered abuse.

What is your stance on Balenciaga after this scandal? Let’s talk in the comments below!

10 Best Designer Tote Bags for all your needs