How cool would it be to go shopping with a Hermès bag in your hand? Let this dream come to reality with the Hermès Garden Party – the ultimate tote from Hermès. Released in 1964, the Garden Party is one of the most popular Hermès handbags outside their top 3 (Birkin/Kelly/Constance). Praised for its impeccable craftsmanship, low-key appearance and relatively affordable price point, the Garden Party is a top pick among first-time Hermès handbag buyers and those Hermès lovers looking for a practical everyday handbag. Read on for detailed information on the style.

The appeal of the Hermès Garden Party tote lies in its simplicity. The bag features no obvious logo’s; pretty much the only way you can identify it’s from Hermès is by looking closely at the engraving on the Clou de Selle snap closure. That’s, actually, one of the most notable features of the Garden Party and one of its biggest advantages. The snap closure means that the capacity of the handbag isn’t confined to its dimensions, so larger items can also be carried, if needed. 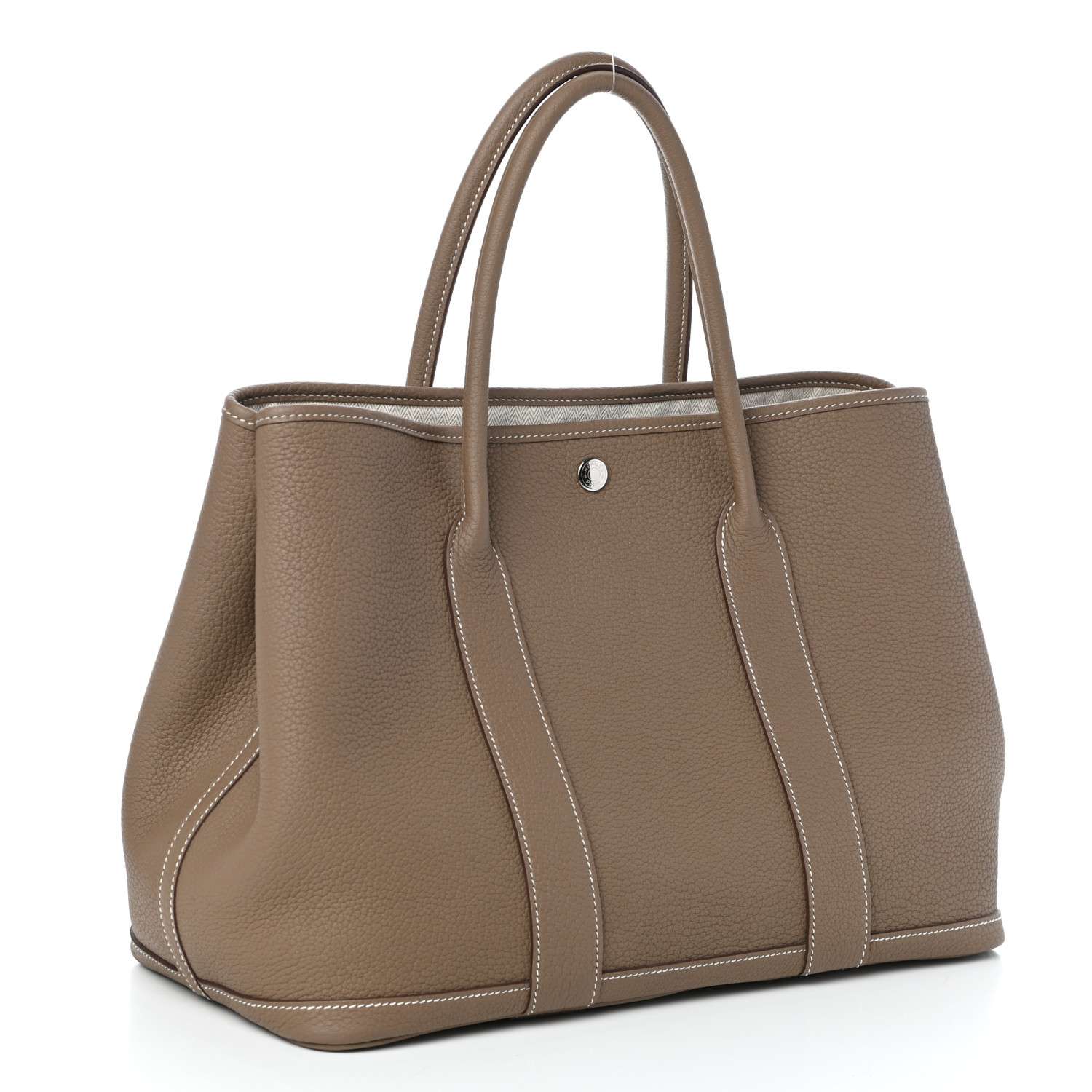 Furthermore, the “Clou de Selle” snap fasteners also connect the sides of the Garden Party Tote. When fastened, these give the bag a very nice, structured appearance. But, when unfastened, these create lots of additional interior space, which comes in very handy when you need to carry more.

Talking about the interior of the handbag. The interior of the Hermès Garden Party features one main, open-style compartment (leather versions of the handbag also feature a zippered interior pocket). Unlike other Hermes handbags, the Garden Party comes with canvas-lined interior. While not as luxurious as leather-lined interior, the canvas interior also has its benefits. The biggest benefit of canvas is that it makes the handbag significantly more lightweight. It also adds to bag’s practicality and affordability. You know the Garden Party would most likely be way more expensive if it came with leather interior!

The minimalistic and understated design of the Hermès Garden Party makes it a perfect handbag for those who prefer to stay away from screaming logos. However, this minimalist aesthetic also means that you can easily put your own spin on the bag by, for example, accessorizing it with one of Hermes’ bag charms or twilly scarves. And that’s the beauty of the Hermes Garden Party tote. Even the simplest accessory gives it a totally different look.

Designed with functionality and practicality in mind, the Hermès Garden Party tote can be carried by hand, on the crook of the arm and over the shoulder (this applies to larger sizes of the bag). I’d say, the only disadvantage of the bag is that there’s no feet on the bottom. For me, it’s not a deal breaker, but it’s always nice when a handbag has feet, as they protect the bottom from wear and tear.

Why go for the Hermes Garden Party Tote?

You may be wondering, why to go to Hermès for a basic tote when there are a plenty of cheaper designer alternatives out there? While this is certainly a valid point to make, try to name another brand with craftsmanship like Hermes’s? All Hermès handbags are created by one artisan from start to finish. That’s something you rarely see at other brands. And that’s what makes Hermès handbags so desirable. They are made to last.

The Hermès Garden Party comes in two different styles: full leather, or canvas with leather trim. The most commonly used leather on the Garden Party Tote is called Negonda. 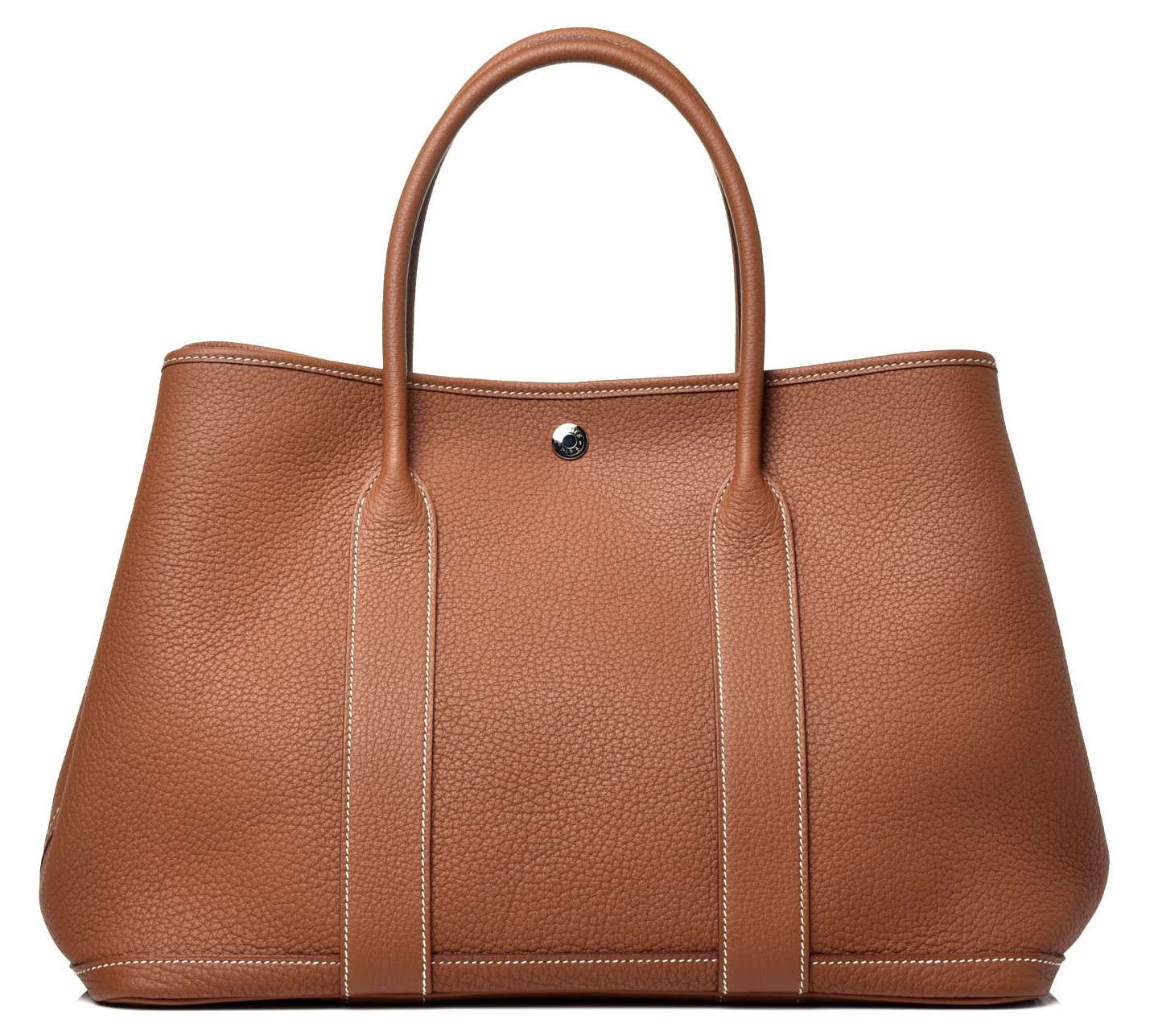 You can also find the Hermès Garden Party in Epsom and Country leathers. A relatively new addition to the Hermès leather lineup, the Hermès Country Leather is a processed female calf leather, most known for its firmness, large grain and durability.

Epsom leather, on the other hand, has been out there for quite a while. Commonly used in Kelly and Constance bags, Epsom leather is characterized by a pressed cross-hatch grain and semi-matte appearance. Completely scratch and water resistant, the Epsom one of the most, if not the most hard-wearing leather from Hermès.

In addition to two different styles, the Hermès Garden Party tote also comes in three different sizes. The smallest of them, the Garden Party 30 (also known as Small), is perfect for everyday. It measures 30cm in length, 21cm in height and 13cm in depth (11.8” x 8.3” x 5.1”) and is excellent for carrying all your day-to-day essentials, like a smartphone, a card case, an agenda, sunglasses and a small make-up bag.

The second size of the Hermès Garden Party tote, the Garden Party 36 (also known as Medium) is better suited for running errands, work and travel. Measuring 36cm in length, 26cm in height and 17cm in depth (14.2” x 10.2” x 6.7”), the bag is excellent for carrying anything from a laptop to smaller everyday essentials.

The three different sizes of the Hermès Garden Party tote:

Considering to add the Hermès Garden Party bag to your collection? Here are the latest prices.

*retail prices as of August 2021 (sales tax not included).

With a starting price tag of just over $2,000, the Hermès Garden Party makes for an excellent entry-level Hermès handbag. A tote bag is one of those silhouettes that’s constantly in use. So, you’re sure to get your money’s worth.

*Disclaimer: Prices in this blog post are listed for information purposes only. Actual prices in boutiques may vary.

Where To Shop For Authentic Pre-loved Luxury

The 10 Best Straw & Raffia Bags for Your Summer Wardrobe