If you’ve been following fashion weeks the last couple of seasons, you’ve likely noticed the current obsession that designers have with the 1970s. There is, actually, a good reason for why designers continue going back to the ’70s for inspiration. Likely, the most stylish decade of the 20th century, ’70s brought us everything from mini skirts to maxi dresses, bell sleeves, flared pants, floppy hats and so much more.

Many of the ’70s fashion trends have earned permanent positions in today’s fashion. In fact, when you look at different fashion trends from the ’70s, many of them somehow look so modern and up to date that it’s hard to believe they are, actually, vintage. Today, I’d like to revise those trends. Looking for ’70s outfit inspiration? Or, simply want to learn about the ’70s fashion trends? Everything and more is in this blog post.

What did women wear in the 70s?

Many people refer to the ’70s as to the “Polyester Decade”. Seventies began with a continuation of the hippie style, which prevailed in the late ’60s. In early 70s, the emphasis was put on everything handmade. You’ve likely heard that in the ’60s, hippies embraced handmade materials and decorations as a way of rejecting the mainstream. In the early ’70s, designers have picked up the trend. So, polyester, crochet, patchwork and all different kinds of embroidery quickly became mainstream women’s fashion.

In addition, the early to mid ’70s was the time period when women’s fashion became more readily available. For the first time in the history of fashion, American women started purchasing clothing for different occasions.

As life was moving faster, women no longer had time to get their clothing custom-made. So, rather than going to the tailor, they opted for purchasing their clothes ready-made from catalogs and department stores. Moreover, with ready-made fashion becoming so much more accessible, fashion trends started coming and going faster than ever before.

As women were gaining more freedoms during the ’60s and ’70s, it was reflected in their style. In the ’70s, women began wearing clothes heavily inspired by menswear. It was exactly in the ’70s when pants and suits became more mainstream as womenswear. Before, women were wearing predominantly skirts and dresses to work and formal events. Pants were only considered acceptable when worn around the house. Finally being able to wear them outside, marked a shift in attitude towards women’s fashion in general.

Yves Saint Laurent was the first designer to present the tuxedo as a form of womenswear. It was in 1966, when in his couture collection he presented “Le Smoking”, a tuxedo suit for women, first of its kind. “Le Smoking” received lots of negative reviews at first. However, in early ’70s, the actress Bianca Jagger adopted the look. It soon became her signature style. So much so, that she even wore a white tuxedo blazer to her wedding with Mick Jagger in 1971. Many believe that exactly Bianca Jagger was the one who popularized a women’s tuxedo in the ’70s.

By the way, every decade has its fashion icons, and the ’70s were no exception. What’s particularly interesting about the 70s fashion icons is that each of those women had their own distinct style. From Bianca Jagger’s extravagant glamour to Farrah Fawcet’s relaxed elegance, ’70s was the decade of some of the most stylish women!

Mid-to-late ’70s are often referred to as “The Disco Era”. The disco style became increasingly popular around the mid-70s. It all began with an article about disco music getting published in the famous Rolling Stone magazine back in 1973. Soon after, a radio station that played disco music only debuted on the New York City radio. That’s when the disco style was born!

The disco fashion was flashy and expressive. It was a lot about shimmery fabrics, sky-high platforms and shiny jewelry. The goal was to stand out on the dance floor. In disco by changing your costume, you changed your identity.

’70s ended with the rise of active wear. In the late ’70s, the American designer Norma Kamali brought sportswear into the fashion arena, by introducing such modern-day essentials as leggings and bandeau tops. Many associate sportswear with the 80s fashion. And that’s correct. It was in the 1980s when sports and fitness wear became increasingly popular even though it originated in the ’70s. 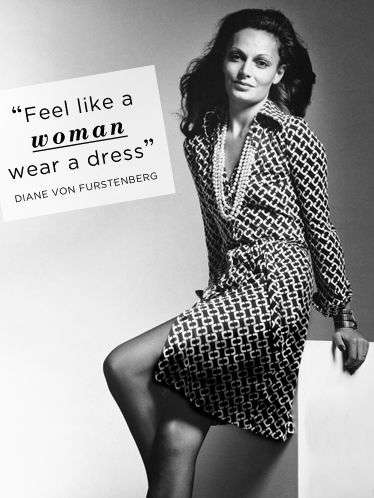 While the maxi dresses were increasingly popular in the seventies, guess, what style of a dress prevailed in the decade? It was, actually, a wrap dress. This type of a dress offered more freedom and comfort compared to the standard maxi dresses. You might have already noticed, that in the seventies, a lot of focus was on trying to make the women’s fashion comfortable. Wrap dresses offered both comfort and style. They offered a professional look when worn for work. In addition, a wrap dress transitioned effortlessly from day-to-evening. One could easily dress it up or down for a glamorous evening out or for a casual stroll down the city streets.

Diane von Fürstenberg produced one of the most popular iterations of a wrap dress in 1974. Over five million dresses were sold in just two years! This was an unprecedented success! Due to their versatility, wrap dresses, pretty much, became a staple in every women’s closet. And they never went away!

There’s a huge variation of wrap dresses available on the market today. You choose: mini or maxi, short or no sleeve, casual or dressier. Options are endless when it comes to wrap dresses. If you haven’t tried on a wrap dress yet, go ahead and get one. The style looks incredibly flattering on all body types. 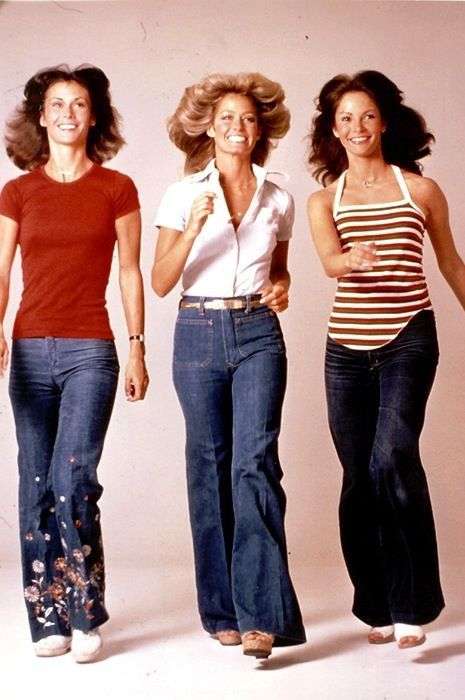 While jeans were invented in 1870s, it wasn’t until a century later that they’ve entered women’s closets. Jeans found their way into fashion around early ’50s. Back then, they were worn primarily by the rebellious, anti-establishment youth. Later, in the 1960s to early 1970s, hippies wore jeans as a way of showing their support for the working class, while feminists wore jeans in order to demonstrate gender equality.

In the ’70s jeans finally established themselves as women’s clothing. As women were gaining more options for full-time and part-time employment, there was a need for comfortable and practical womenswear. Jeans seemed like a perfect solution for a woman on-the-go!

Flared jeans and bell-bottoms in any shape or form were considered the women’s fashion staple in the ’70s. However, closer to the end of the decade, jeans became more slim-fitting, with straighter silhouettes slowly taking over the popularity of the flare.

It seems like flared jeans are set to make a big comeback in 2021. They were spotted on Spring/Summer 2021 catwalks of numerous high-fashion designers from Balmain to Paco Rabanne. However, I do think that the ’70s silhouettes started to pave their way back to our closets the moment we swapped skinny jeans for looser-fitting denim. I am, actually, very excited that the flares are back. They look flattering on nearly every body type, visually lengthening the legs and accentuating the waist. 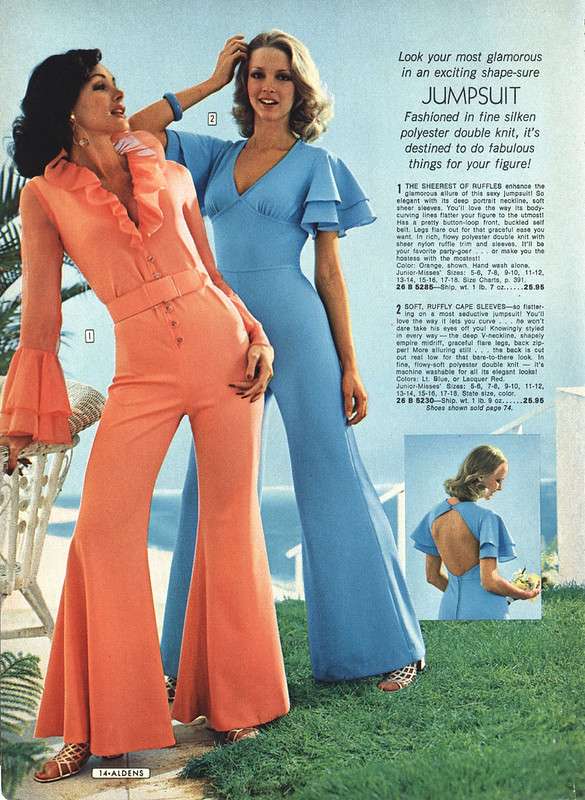 Admit it: we all remember Elvis Presley rocking those iconic white jumpsuits. The jumpsuits, however, weren’t just a man’s thing back in the days. In the ’70s, jumpsuits were popular among both men and women. They were worn both casually and on the dance floor. Ah, those disco times!

In the ’70s, jumpsuits were glamourous. Often made from bright colored fabrics, a jumpsuit was seen as a good alternative to the maxi dress. Moreover, styled with a pair of platform heels, it made a perfect disco party outfit!

However, jumpsuits in the ’70s weren’t made just for nights out. Women started wearing them in the late ’60s when hosting guests at their homes. Obviously, a jumpsuit was a way more practical and comfortable choice than a dress. Soon, the jumpsuit went mainstream and women started wearing them everywhere, both leisurely and to the parties. A typical jumpsuit from the ’70s was almost always flared in the legs and had bell sleeves. However, sleeveless versions were also quite popular.

Over decades, designers have continued to innovate jumpsuits for new generations.  Today, they come in a variety of styles and silhouettes. Relaxed silhouettes are perfect for casual occasions, while a tailored jumpsuit is a great choice for dressier events. By the way, many brides these days are choosing to wear jumpsuits for their weddings instead of traditional wedding gowns. Bridal jumpsuits come in a range of silhouettes, from sleek styles with minimal details to dramatic designs with lots of shimmer and embellishments. 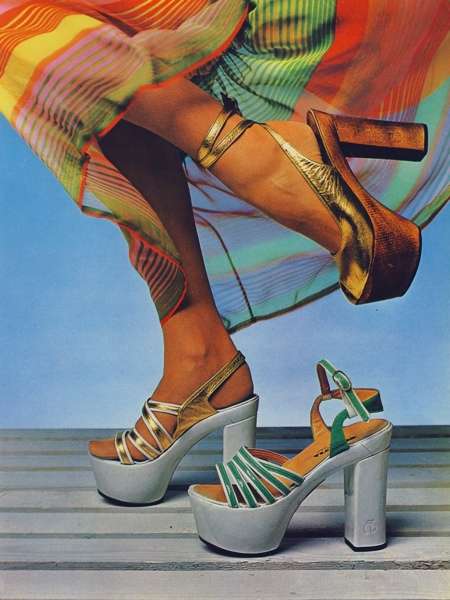 When it comes to shoe trends in the ’70s, looks like the motto here was “the bigger, the better.” In the ’70s, platform shoes were the preferred style of shoes for both genders. Some call them the official footwear of the decade. And for a good reason. These shoes attracted lots of attention. Even men wore platforms to the disco parties!

However, the history of platform shoes dates to way back in the days. People always wanted to look a little taller than they actually are. The first mentions of platform shoes date back to Ancient Egypt, where Pharaohs and their wealthy followers wore them as a symbol of status and wealth.

Platform shoes were also present during the Renaissance. It was only around the late 1700’s, when the allure for platform shoes died down. So much that they have pretty much disappeared completely, until they made their iconic return nearly 200 years later, in the 20th century.

Platform heels, sandals and boots were absolutely ruling the ’70s. I highly doubt that anyone managed to escape the trend. In the beginning of the ’70s, most platform shoes featured chunky or block heels. However, later on in the decade, thick soles started being paired with thinner high heels. 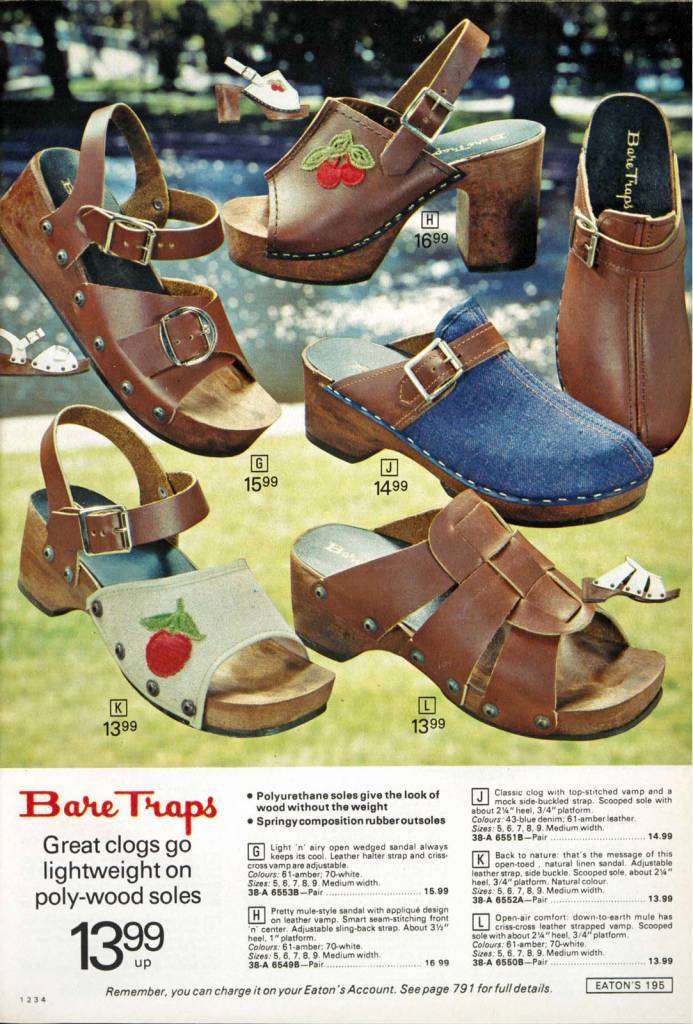 Spring/Summer 2021 marks the return of clogs, which was another really popular type of footwear in the 1970s. In the ’70s everyone was wearing clogs, that being men or women, celebrities or schoolgirls. The chunky wooden shoe was imported to America from Europe and quickly became a hit.

In 1970s, clogs were often paired with bell-bottom jeans. However, they were also styled with dresses and skirts. Clogs were, indeed, really versatile. Perhaps, the versatility and functionality of clogs is what helped to fuel their popularity. The shoe was so popular that dedicated clog brands have emerged. Among the most popular clog brands in the 1970s were the Bastad, Mia, Sven and Connie. So, you can imagine, there was quite a variety of clogs to choose from.

Clogs never really went away from the fashion scene completely, but it looks like in 2021 they are about to make a major comeback! We’ve seen ’70s inspired clogs on the Hermes Spring/Summer 2021 runway, styled with everything from shorts to jumpsuits, dresses and coats. Other designers, incl. Louis Vuitton and Stella McCartney also featured clogs in their Spring/Summer 2021 collections. Considering that flared jeans are also coming back, the return of clogs couldn’t be better timed. The two are meant for each other.

The Best Shearling Bags To Carry This Winter