While the Hermes Evelyne isn’t as widely known as the Birkin, it remains one of the House’s most popular bags. Loved for its simple design and functionality, the Evelyne is a top choice among those H lovers that are after something a little bit more casual and a popular option among those looking for an entry-level Hermes bag.

Regardless if you already own a Hermes Evelyne, or are just considering to add it to your collection, here is everything you need to know about the bag.

It was in 1978 when the former head of the Hermes riding department, Evelyne Bertrard and her team, sat down to create a bag that would serve as a convenient carryall for horse grooming equipment. They came up with a design of a crossbody bag that featured a simple messenger-like silhouette, with a small belt closure and a removable shoulder strap. The bag was named the “Evelyne” after Bertrard. The defining feature of the bag was the perforated “H” design on the back, which allowed for aeration of the grooming tools while those were carried. Yes, you were supposed to carry the Evelyne with the the “H” facing the body!

Unfortunately, back when the Hermes Evelyne was originally released, it wasn’t envisioned as an everyday handbag. The design was developed strictly for the Hermes equestrian department and that’s where it remained for decades. It was only with the beginning of the 21st century, that Hermes finally understood the Evelyne deserved a wider audience. In the early 2000’s the style was officially moved from the equestrian to leather goods department. And, that’s where the Evelyne finally got the attention it deserved! 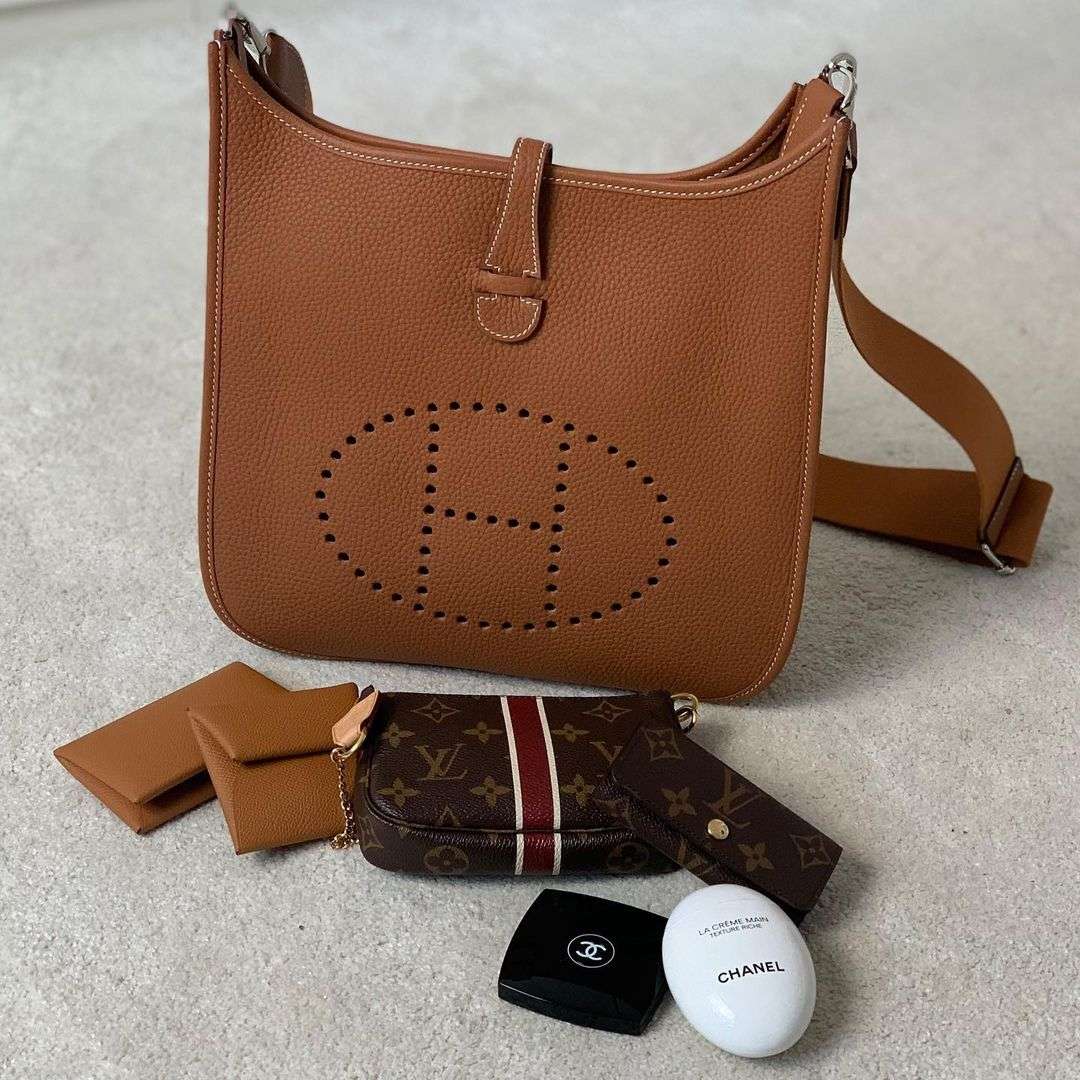 3 Generations of the Evelyne

Evelyne Sellier is also one of the newer available styles for the bag. It was released for Fall 2016. Instead of the perforated “H” design, the Evelyne Sellier features an embossed, diamond-shape “H” logo. There is also no external pocket.

The 16, or TPM is the smallest size for the Evelyne bag, measuring 16 centimeters in length and 18 cm in height.

The Hermes Evelyne TPM is spacious enough to fit in an iPhone, a smaller wallet and a few of other essentials. Many consider this bag ideal for travel, as it doesn’t take a lot of space in a suitcase and is a good size for carrying travel documents. 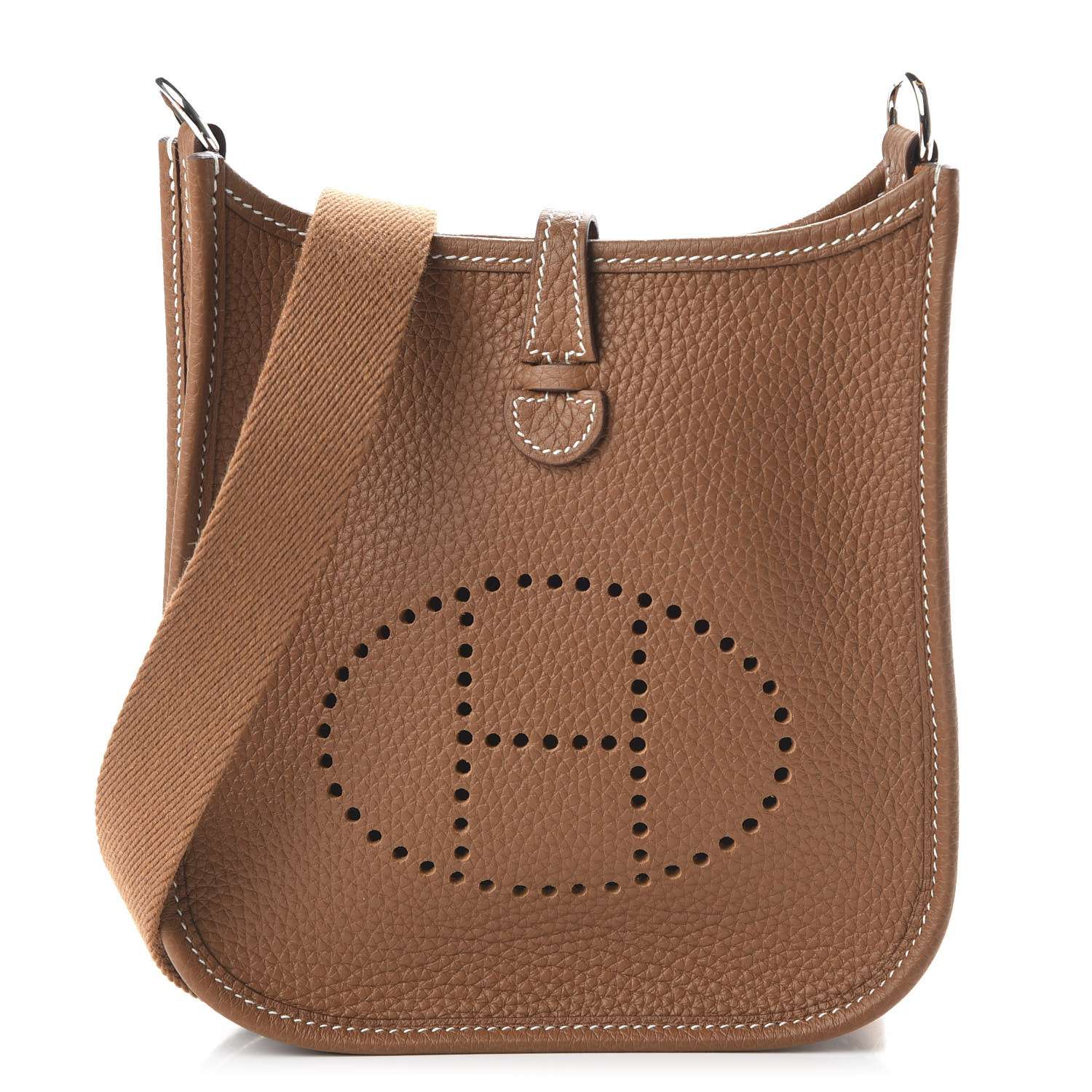 For a while now, there have been rumors going around about the Evelyne TPM possibly getting discontinued. However, this information hasn’t confirmed yet. As of June 2021, the Evelyne TPM is still available for purchase at Hermes boutiques around the World. To be honest, I don’t believe Hermes is going to discontinue the TPM size anytime soon. The TPM is one of the most, if not the most popular size for the bag at the moment. Discontinuing it right now would be a huge mistake for the brand.

Next size in the Hermes Evelyne line-up is the Evelyne 29, otherwise known as Evelyne PM. The Hermes Evelyne PM measures 29 cm in length and 30 cm in height. Many Hermes Evelyne lovers consider the PM size the ultimate everyday crossbody. This bag will comfortably hold all of your essentials, in addition to a make-up bag, snacks and even a bottle of water.

The Hermes Evelyne 33, or GM measures 33 cm in length and 31 in height. Many people often have a problem picking between the Evelyne PM and GM, as there is only a couple cm difference between the two sizes. My personal opinion is this: if you don’t like overstuffing your bags, the Evelyne GM is a better choice. Nonetheless, I’d still recommend that you to go and try both bags if you can. I’ve heard that some people find the Evelyne GM too big for their frame. That’s why it’s crucial to try both bags before you are gonna make your final decision.

Finally, if you are looking for a bag that would fit your entire life, you must check out the Hermes Evelyne 40, otherwise known as the Evelyne TGM. This bag measures 40 cm in length and 44 cm in height. If you carry lots of stuff or travel a lot, this might be a bag for you.

Here is a detailed breakdown of the Hermes Evelyne III sizes:

Evelyne bags are typically made in two types of leather – Clemance (a matte, flat-grained, scratch resistant leather ) and Epsom (a lightweight, embossed-calfskin leather ). Bags are also manufactured in other types of Hermes leathers, such as Maurice (a new Hermes leather, alternative to Clemence) and Hunter (smooth and soft to touch cowhide leather). 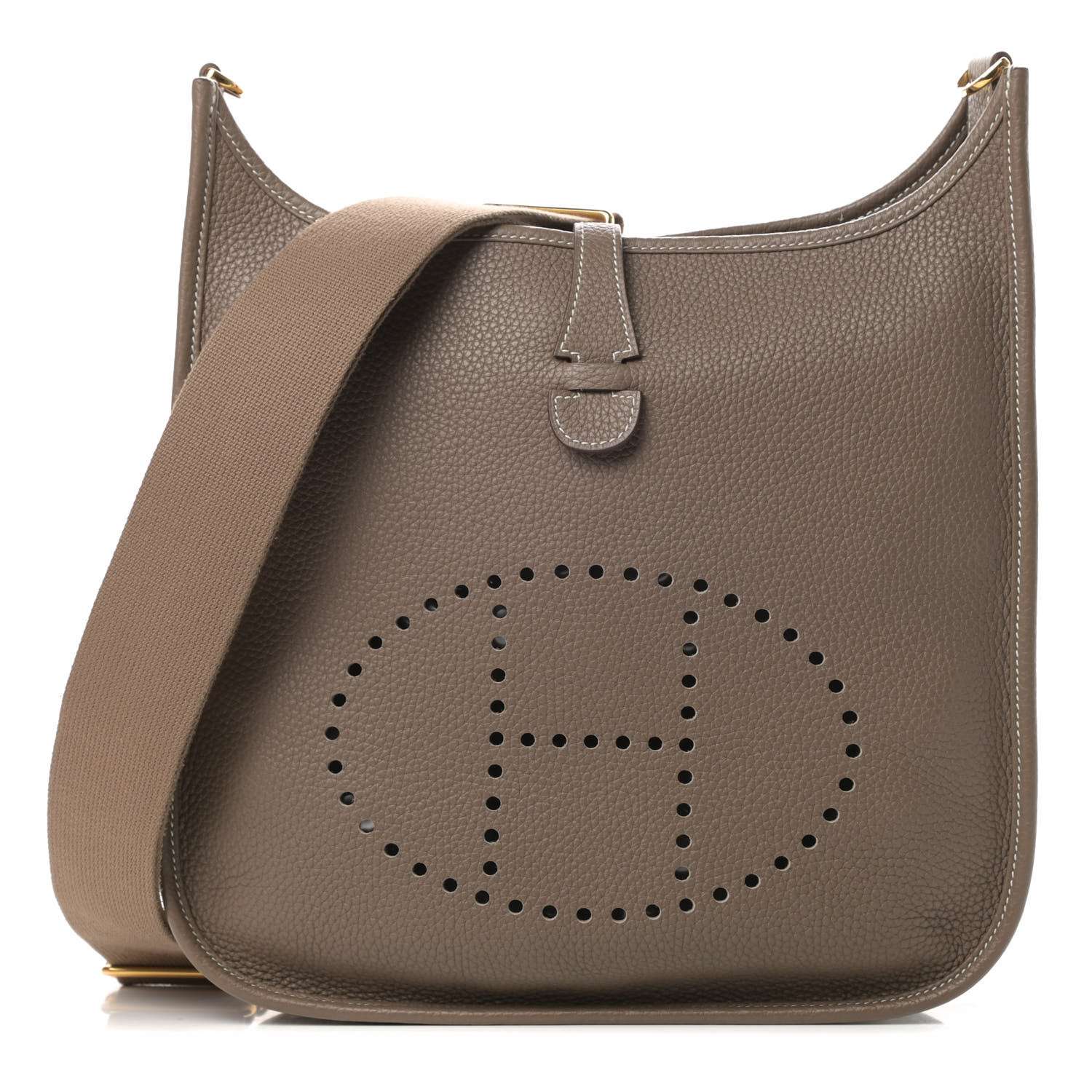 It’s important to notice, that regardless what leather is being used, the interior of the Hermes Evelyne is always going to be raw. The removable strap is made of durable canvas with leather accents that match the colors of the bag. Talking about the colors: Hermes Evelyne bag comes in a variety of neutral and vibrant colors. From classic black to bright green and yellow, when it comes to Hermes Evelyne bags, the color choice is endless.

Planning to buy the Evelyne in 2021? Here are the latest prices.

*all prices are for Evelyne III in Clemance leather

As of June 2021, the Hermes Evelyne TPM in Clemance leather retails for $1,800 in the United States and €1,330 in Europe. At the time of writing this blog post, €1,330 converts to roughly $1,600, which means that the bag ends up being $200 cheaper in Europe. If you have an eye on the Hermes Evelyne TPM and happen to be planning a trip to Europe, you might want to take advantage of the cheaper price there.

With a starting price tag of just $1,800 Hermes Evelyne makes an excellent entry-level Hermes bag. Compared to other Hermes styles, the Evelyne is pretty affordable. Take, for example, the Birkin. The cheapest Birkin (B25) will end up costing you over $9,000, and that’s if you are lucky to score it directly from the boutique. The Hermes Evelyne, on the other hand, is way easier to access and the bag is significantly cheaper. It’s also a style that you can wear everyday, doesn’t matter if it’s a day full of errands, or a lunch with friends. If you ask me, the Evelyne is very worth it!

*Disclaimer: Prices in this blog post are listed for information purposes only. Actual prices in boutiques may vary.

Chanel Handbags Worth Buying in 2021