Do you have a Hermès Kelly on your wishlist, but your SA hasn’t offered it to you just yet? Well, while you wait for your dream bag to arrive, you might also want to consider adding another Hermès handbag to your collection. Specifically, the Herbag. Often referred to as Kelly’s affordable cousin, the Hermès Herbag offers the same iconic shape, but at a fraction of the price of the Kelly. The best part yet? The bag is typically available for immediate purchase at Hermès. So, no need to wait for ages to get your bag. Just go to Hermès and get one. However, you might want to learn everything about the Herbag first. 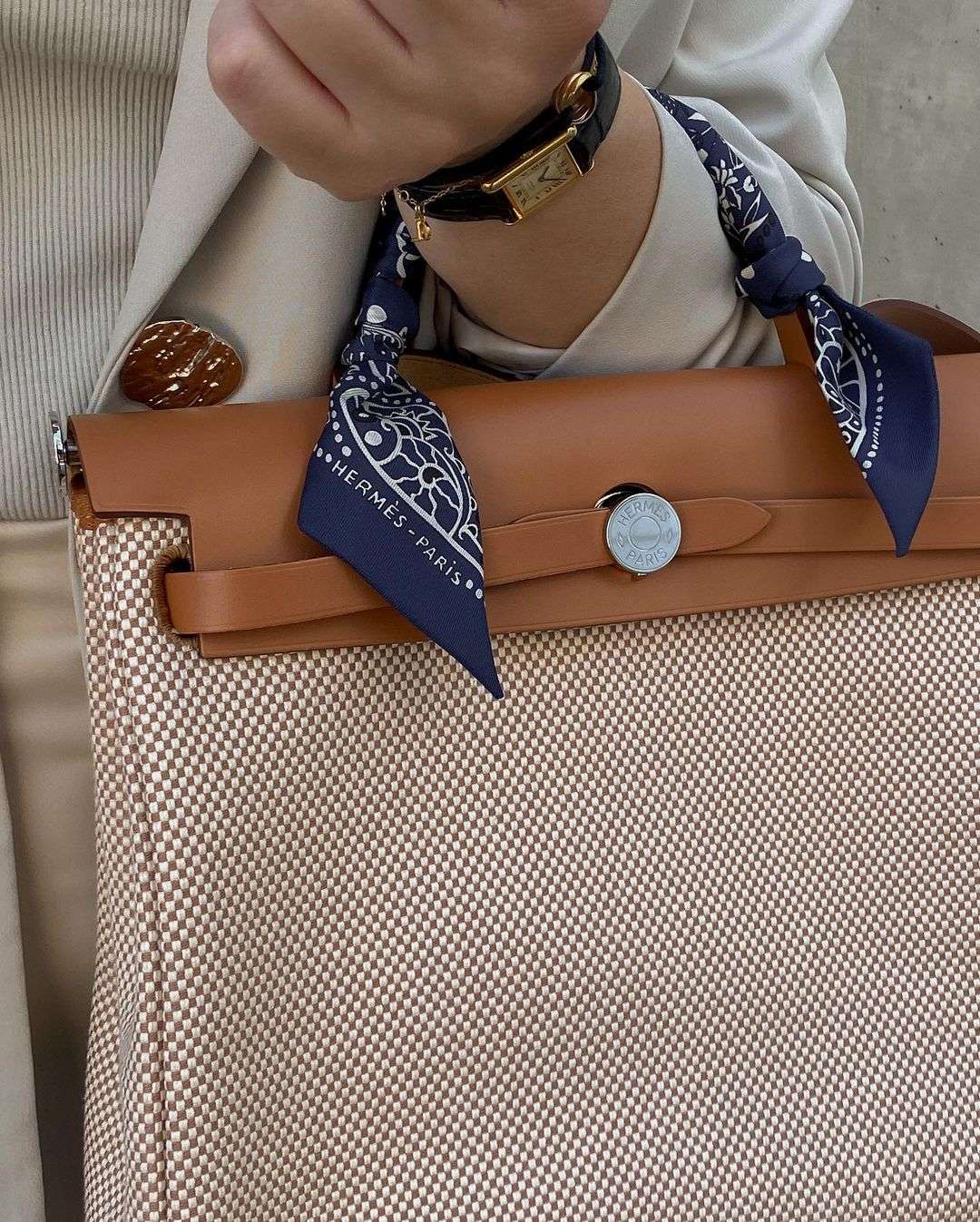 While not much is known about the origins of the Hermès Herbag, we definitely know that the design has been around for at least 4 decades. That’s because till this day you are able to find older versions of the Herbag from the 80s and 90s on the pre-loved market. Actually, if you explore the pre-loved market for a bit, you will notice that most Herbag’s for sale are either from the previous century, or from 2009 and onwards. This is due to the fact that Hermès discontinued the Herbag around the early 2000s, but brought it back in 2009 with a slightly updated look and a new name – the Herbag Zip. While maintaining much of Herbag’s original design, the Herbag Zip has a few added elements, among which are the zipped back pocket and a removable interior pouch.

Talking about the specific design features of the Hermès Herbag. Just like the Hermes Kelly, the Hermès Herbag is characterized by a trapezoid shape with a top handle and a detachable shoulder strap. In fact, when you compare the two bags side by side, they look incredibly similar. However, as you look closer, you notice quite a few points where they differ. The main point being the material. The Hermes Kelly is a full leather style, while in the Herbag only the top part is leather and the rest is canvas. 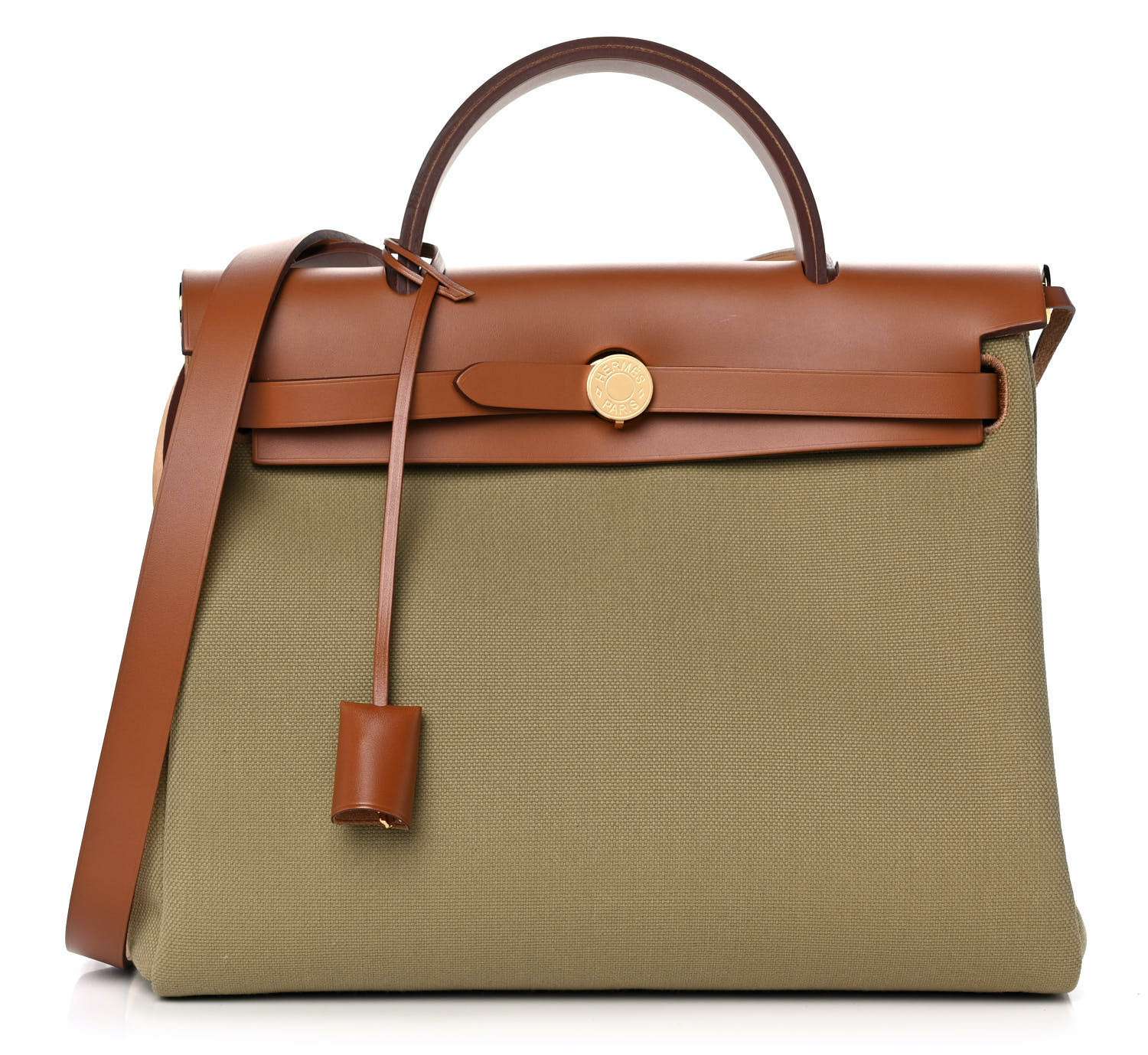 Actually, the most exciting feature of the Hermès Herbag is that the top of the bag can be detached from the body, which essentially means that you can mix and match Herbags if you wish. Furthermore, many Hermès Herbags come with a reversible body, which means that all you gotta do to change up the look of your handbag is to turn it inside out. Isn’t that awesome? With the Herbag you are basically getting two bags in one and that’s something we don’t see too often. The Hermès Herbag also features the clou de selle closure and a zipped pocket at the back. However, the latter is only present in newer versions of the handbag.

As it was mentioned earlier, the Herbag uses canvas for the body and leather for the trim. When it comes to canvas, it’s typically either Hermes Officier, or Military canvas. Both are known as extremely durable and sturdy materials. And so is the Vache Hunter Leather that adorns the top of the handbag.

You will usually encounter Herbags in solid color canvas. However, you might also be lucky to come by limited edition styles that feature exquisite designs on the canvas. My personal favorite of all limited edition Hermès Herbags is the Pegase Pop, which features an image of flying pegasus on the front. 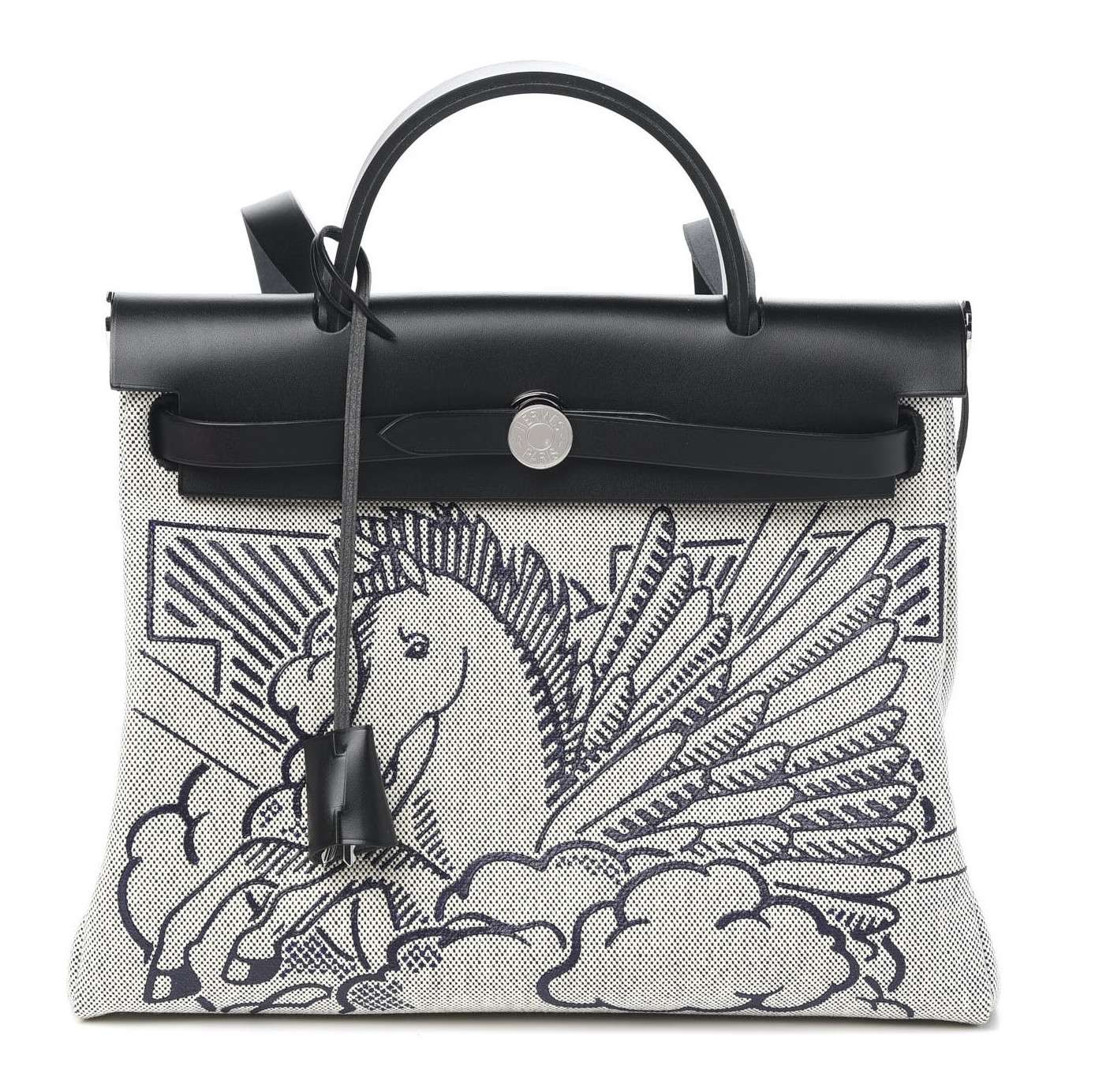 Most Herbags feature palladium plated hardware. However, gold hardware options also exist. They are just a little bit harder to come by.

The Herbag currently comes in 4 main sizes. The smallest of them – the Herbag Zip 31 is 31 cm long, 25 cm high and 10 cm deep. As you can see per handbag’s measurements, the size isn’t really that small. I would say that the Herbag Zip 31 is an excellent option for everyday. However, if you carry a laptop on a daily basis, you are better off by picking up a Herbag Zip 39. Measuring 39 cm in length and 32 cm in height, it’s a perfect bag to carry a laptop, among other office essentials.

See specific measurements of all the different sizes of the Hermès Herbag in the table below.

The Herbag is one of Hermes’s most affordable bags thanks to its canvas construction. But how much does it actually cost? Is it really that much cheaper than the Kelly? See by yourself in the table below:

As of August 2022, the smallest version of the Hermes Herbag, the Herbag Zip 31 in Military Canvas and Vache Hunter Leather will cost you $2,675 plus tax in the United States. But how about the Kelly? Well, as per time of writing this article, the Hermes Kelly 28 in togo leather retails for $10,600 plus tax, which means that there’s a whopping $7,925 price difference between the two bags! You choose which one to go for. However, we must acknowledge the fact that with such a massive price difference a Herbag is a very tempting buy.

The Hermès Herbag Zip 39 in the combination of military canvas and Vache Hunter Leather currently retails for 2,900 plus tax. Each of the travel sizes (the Herbag Zip Cabine and Zip Weekend bags) go for $3,850 and $4,225 respectively. The Herbag Backpack, on the other hand, will cost you $3,150 plus tax.

Would you go for a Herbag instead of a Kelly? Or, would you buy both? Sound off in the comments below!

The Best Quilted Bags to Add to Your Closet

The Best Designer Bags under $1000